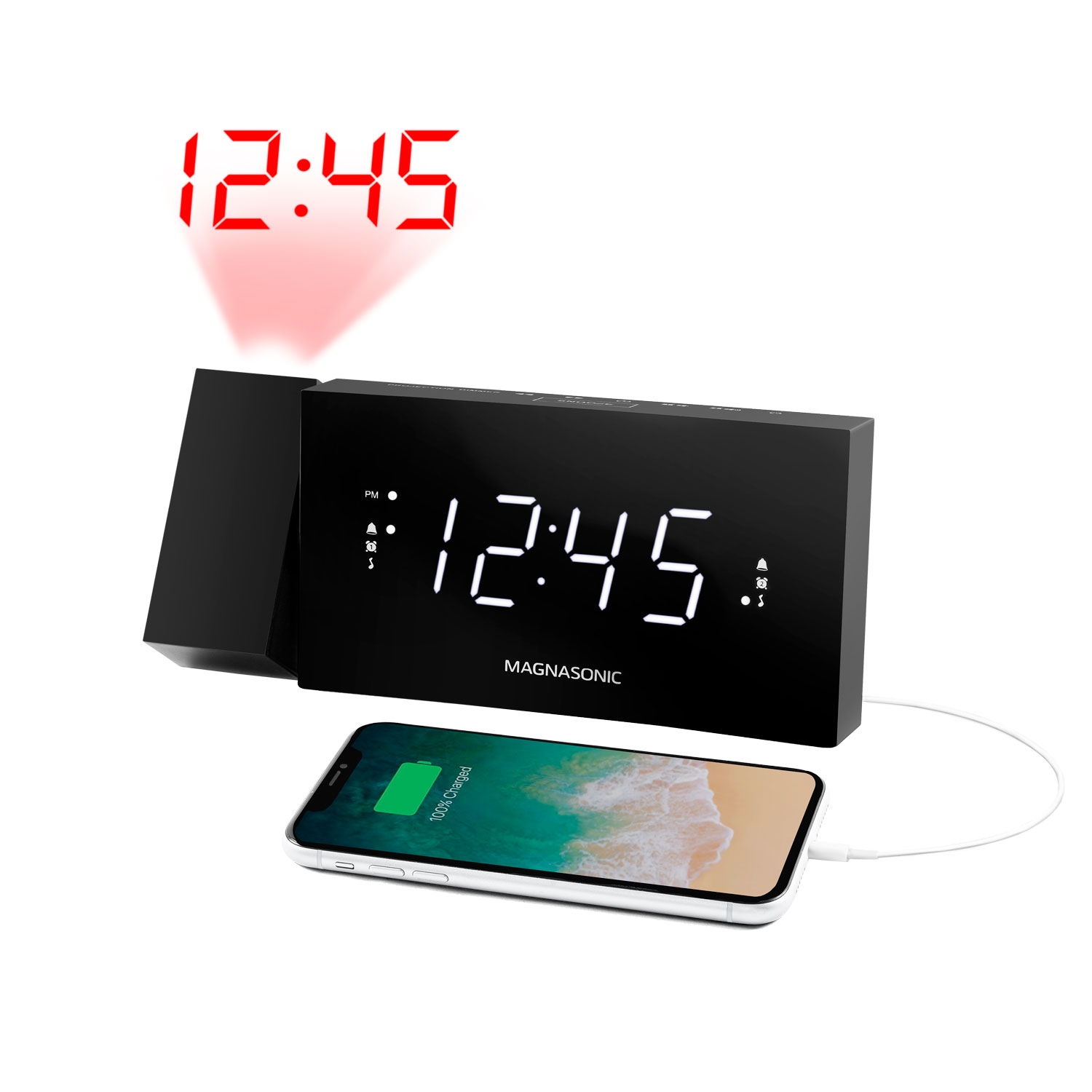 Pétit Z May 24, 2021
Disappointed when it stopped working

I got this watch especially for the time projection. Everything worked as described in the ad for a little while and then some numbers stopped showing up on the main screen. Numbers like 5 or 8 are missing part of their “body” with can mislead big time. It happened when I thought it was 8:58 am and the watch was showing 8:18 am. Other than that it works great.

OK... this has been in use for months, in my son's room. It works fine - and you can see the clock face well in the dark or with the light on. With some light reading and experimentation, you can easily set the time and your alarms.In my opinion, that's where the functionality of this should end. I'm frustrated as I've tried many many times to work with this clock to get it to function with the 'projection' aspect. That, the projection, is a total bust. No workie. Nada. Worthless. The reason I've taken a while to review, is that almost every single time I turn that on - it's 'looks' different! So, I've assumed I've done something bad, needed to give it a stiff slap, or something like that. No - just does not work. I see bits and pieces clearly - full brightness - like I'm reading Klingon or some strange language. Other times, I see a portion of the time nice and perfect, but never, ever, the 'whole thing' to be usable.Outside of this, it's just odd. The way you set the time and such is unique, and not similar to the past decades of digital clocks with standard hour/minute/alarm/pm/am buttons. You'll need to read up to set everything.On the plus side, for the price you do get a lot particularly if you're fortunate enough to get one that projects as I had hoped for. It has varying degrees of brightness, multiple alarm options, etc. So, I'll give it 3 stars as it is a functional alarm clock for my son who also uses the USB charger from time to time.

I've never had a digital clock quite like this one. It has large, easy to read white letters and has an excellent projection feature to show on an adjacent wall or ceiling! I personally project it onto the opposite wall so no matter which way I'm facing in the middle of the night, I can clearly see the time. I don't use the radio feature or the alarm, but it's there if you need it.

Love this clock. I thought the product was malfunctioning so had to deal with the company. They were great, responsive and patient. Turns out, the issue was that I entered the incorrect year when setting the clock. Pay attention to the year :).

This is in my middle schooler's room. It was easy enough for her to figure out and set both the time and the alarm itself. The display is clear and easy to read, and since she has a loft bed, it had to be since it's set across the room from her bed. She adjusted the brightness so it didn't keep her up, but she could see it as needed. Since it's across the room, she doesn't usually use the snooze feature, but the rest is all great for her. It picks up her favorite radio station clearly so she doesn't have to be woken up by an annoying buzzer, which is a feature that seems harder and harder to find. The battery back up is great in case she 'accidentally' unplugs it, too. Overall, perfect for our needs.

I like the slim design of the radio, alarm is loud (which what I prefer) but the sound quality of the FM radio is not that good. Well, my sole purpose for purchasing this was the alarm, so I guess can't complain much on the radio sound quality. Overall, not bad.

This is the best clock I have ever purchased. I like the white. Radio is clear and the features are great. It’s small too.

This is perfect for me, exactly what I needed. I only take one star off because I can't get the time to project on the ceiling directly above me, but that's not a deal breaker. It's a good size, I love that I can adjust the brightness!! That's a HUGE bonus for me! I don't have to worry about becoming too "alert" from the brightness when I wake up in the middle of the night. It's a good buy. I'd purchase this again and recommend it to anyone who wants a new alarm clock.

All good except the clock easily tips over backwards

This is really two clocks in one. As a straight-up alarm clock, it is one of the most attractive I have seen, with a dimmable white-on-black display. The FM radio is tinny sounding, but I really didn’t get it for the radio – still, handy for emergencies. The alarm isn’t particularly intuitive, but most alarm clocks aren’t very user friendly, and you get used to it. Still, attractive, and the built-in USB charger is a nice touch.Where it really shines is as a little “clock projector”. I put in one of those outlet/cell phone charger shelves (see picture), put the clock on it and use it to project onto my ceiling at night. It winds up being bright enough to see in the dark without lighting up the room, and I have the clock display turned off. It has kept good time, although if the time drifts off a little, in this application it really doesn’t matter.So, an attractive clock, and a great little projector, but hard to use it for both as the projection angle won’t likely work out to be the same as the clock angle. But a winner for me, and recommended when used as described.

I like the small size, clean lines, and unintrusive display on this clock radio. Projector is a little weak if you have a high ceiling, but still ok. USB charger is handy. Very clear instruction manual. Great price.

It took some getting used to, but after a few days I find I like it better than my old alarm clock. I am not fond of tiny round buttons on the back for the controls, but after a few times you know where they are and do not really need to see them to work them. I do wish the alarm were a bit louder, but it wakes me so I will not mention it.It projects the time very clearly on the ceiling or wall depending on where you aim it. You can even dim it if it is too bright. The sound from the radio is about standard for these types of alarm clocks, but the stations come in well. You have presets for the radio that you can set. If you use the radio, I would use the presets. Push the button and it goes to the next station. I had no idea there were that many stations, so use the presets. You can use the time display on the clock and that is dimmable also or you can use both. That is what I do as I face the clock when I sleep on my side. The projection to the ceiling is so my wife does not have to ask what time is it.You can set the alarm to go off every day, just weekdays or just the weekend. Now the beeping alarm I like. It starts off for the first ten seconds with one beep per second. Then the next ten seconds it is two beeps per second. The next ten seconds is three beeps per second. You wanna turn the alarm off before that finishes. What happens then is approximately 10 plus beeps per second for eternity or until you shut it off. So like I said could be louder, but it wakes me up. With the radio for an alarm you can set the volume.For the price this is a pretty good alarm radio. It works without hiccups. That is good enough for me.

Does this clock have an AM radio?
No, the CR20 Alarm Clock Radio does not have AM radio, only FM.
Will the alarm go off even if the power goes out?
Yes! The CR20 features SureAlarm which ensures your alarm will sound for the time you set even if the power is out. This is powered by a battery located in the bottom of the clock.