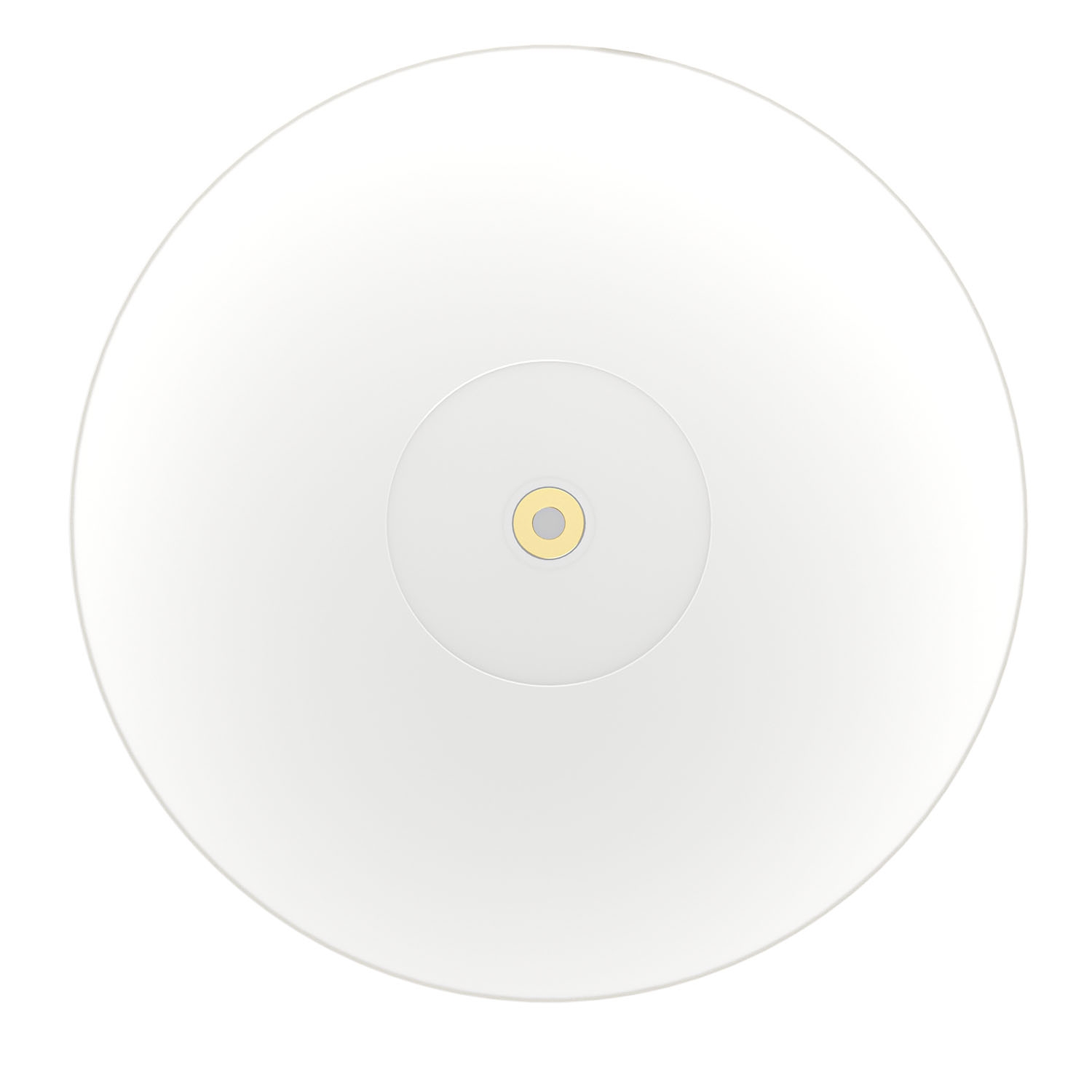 It is much improved over the old platter,runs true & flat.

So I bought the platter as an accessory to one of thier turntable sets. And it's sounds amazing. Older vinyl records would skip and jump on my previous portable player. But once I played on the new turntable and I stalled the new platter the music experience was elevated. The acrylic platter will truely enhance the performance of any fluance turntable. A must have.

Platter is very well made and looks great. Bought as an upgrade to an RT82. I did not notice improvement in sound quality and speed stability seemed about the same as with the stock platter according to iphone apps. I would say get it if you like the looks but don't expect much improvement. Stock RT82 is an incredible value - stick with the stock set-up.

I wanted to get into vinyl, so I got a Fluance RT82 last year with the intent that if I REALLY got into it, I could easily upgrade as I went. I liked playing vinyl but felt that it was just lacking in depth and bass. Heavier records and audiophile quality sounded fine, but I really needed to crank up the receiver to get any really clarity and bass on other records, which then left me a loud buzzing sound between songs.So after some research, I settled on upgrading to the Acrylic platter and changing the cartridge to a MP-110, in effect giving me the top of the line Fluance RT85N.Let me tell you, the difference in sound is INCREDIBLE. Finally I can hear the crisp detail of records of all quality, at much lower volumes.I should have just got the 85N to begin with, but oh well. Im completely happy now.

Good platter. I cannot comment on any difference in sound as it may be there, but without a critical A to B comparison I cannot tell a definitive difference. I also cannot comment on the speed stability due to the increased mass, again could be there but without swapping table back and forth between acrylic and the original aluminum one, I cannot tell.The only aspect I can comment on is the aesthetics of it. I have a white RT83 that I've now upgraded to be on par with RT85 both the platter and the stylus. With the acrylic platter, record player looks very nice and was approved my wife in terms of its presentation. :)One thing to note though, I had to adjust the height of the tone-arm bridge, as the bride would not go down, low enough to fully release the tone-arm, after the platter upgrade. I'm assuming because I removed the rubber mat and potentially acrylic platter being thinner, the original factory adjustments were not enough to release the tone arm. The adjustment is super simple, there is a small, silver screw on the bridge, right under the tone arm that you need to turn (don't remember which way) and check if the bridge lowers far enough to fully disengage the tone-arm. Check at both the outer rim of the record as well as the inner, closer to the label. Once that was done, everything is honky dory.

SI 5
David T December 11, 2022
Made a huge difference for Bass feedback and Vibrations

I have the Fluance RT85 that I bought last year after deciding to get back in to vinyl. I was going to purchase this acrylic platter but decided against it, cost being the factor.I have my setup on furniture that's on a wood floor. DLK floor speakers are sitting on high density foam pads; on the floor. I noticed immediately that longer duration bass would couple itself into the turntable. Long enough, and it would reverberate (think Emerson Lake Palmer's Lucky Man). Also, anyone walking close to the cabinet would cause their footsteps on the wood floor to be picked up by the turntable.I tried several things; stick on cork pads on the bottom of the turntable's feet; made it worse. Put stick-on felt pads on the cabinet where it sits on the floor; no difference. Increased the down force on the stylus; marginal difference.I went back and re-read the reviews on the platter and decided to give it a try. It arrive last Friday. Installed it and put on ELP. I walked near my cabinet; didn't;t pick up my footstep vibrations. When the heavy bass came on the LP, no feedback whatsoever.My conclusion is that this acrylic platter made 100% difference in the playback. I don't know if I can tell if it actually increased the dynamic ranges of the bass' and trebles as some suggest, but I still think this is a great buy for what it does. I only wish that there would have been an option to purchase the RT85 with the acrylic platter up front rather than later.

I'm over fifty years old and so are my ears, so I can't really speak to any sound quality claims, but I have no reason to doubt them. I bought this simply because it looks cooler than puck, and it does that incredibly well.

Ordered for Chris gift for my son. Received my order very quick! Would recommend ordering from this company.

I like the sound there's a sound improvement BUT after testing it. My records skipped VERY disappointed! I never had this problem before good thing my cork mat stopped those nasty skipping BEWARE! I gave it 3 stars why? Because it skipped!

I purchased the RT 82 and used my own Shure V15 vmr cartridge rather than the OMD 10. I upgraded the platter with this acrylic and my music has never sounded better.

This snakeoil actually worked! In all seriousness I am skeptical about certain claims about which components significantly impact sound especially when it is anything over $40. With that said I started off with a fluance RT82 ordered from amazon (you can see my review there), which I thought was great. I upgraded to the Ortofon 2m silver (also you can see my review) which at the time was a turntable lab exclusive product. The cartridge made a significant impact on clarity compared to the OM10.The platter made just as much of a change in sharpening the lower frequencies, mainly bass. I first played Refugee from Tom Petty's Damn the Torpedoes Deluxe Edition LP using the original platter as it was exceptionally clear. After adjusting the tonearm to account for the lack of slip mat on the acrylic platter played it again everything else the same and the opening struck hard, in essence more of a thump than before. I played the album through and was impressed.I feel this was well worth the money.

Absolutely great turntable. Sounds incredible. I highly recommend getting the acrylic platter, as well. Couldn't be happier with it.

It has made a difference. The biggest thing I've noticed is the clarity in the low notes. Bass lines are more distinct. Low piano notes and synthesizers have more fullness. The kickdrum, toms, snare and rotos pop more. Is it worth $120 to tune your music? To me it is. To be able to listen to music and hear things for the 1st time I've never heard is simply amazing. Being a big prog rock fan, there's so many individual things going on in many songs that I want to hear and in my ears opinion, this acrylic platter brings so much of that out. I've tried heavy rubber, cork, glass, & acrylic mats and nothing has come close this. I believe to fully get the most out of your vinyl collection you must have a good cartridge/ stylus, preamp and speakers. All played on a CLEAN record. This platter will take those 4 things and really enhance your music.

Aside from making the turntable look great, it does add to the sound.

Nice platter. Definitely doesn't resonate or " ring " like the original platter when you flick it with a finger.

What are the benefits of an acrylic platter?

How to Reduce and Remove Static on your Vinyl Records | Antistatic brush, inner sleeves, and more

Can I use the acrylic platter on RT80 or RT81?
No, the AP03 Acrylic Platter is not compatible with RT80 or RT81 due to the position of the motor.

The Ultimate Guide to Turntables
What is the Difference Between the Types of Turntable Platter Mats?
When to Change the Stylus on Your Turntable
How to Upgrade, Change or Install a New Cartridge on a Fluance HiFi Turntable