Truly immersive three-dimensional sound in the comfort of your living room. The Signature Series Bipolar speakers create an amazingly convincing surround sound experience you would expect in a movie theater. Whether enjoying movies or binge watching your favorite TV shows, these bipolar speakers will ensure you are in the middle of the action. So grab some popcorn, sit back, and enjoy.

The Fluance Signature Series is a powerhouse in home audio. From the powerful midrange, to the ultra-high end tweeters, these speakers are the result of years of meticulous engineering. With a focus on sound excellence, every detail has been measured, tested, and perfected to recreate even the finest audio details with crystal clear accuracy.

Widespread, enveloping surround sound throughout your entire room. The unique bi-directional design of these speakers produce a large three dimensional soundstage. This is achieved with two tweeters on opposing sides of the cabinet allowing an ideal mix of direct and indirect sound. Designed for placement beside or behind the listeners for a room filling home theater experience no matter where you sit.

Midrange that Accentuates Every Sound Effect

The midrange drivers are woven with light weight yet rigid glass fiber for optimal linear movement to handle even the highest volume levels and still ensure sonic precision and clarity. The unique pointed dome allows sound waves to travel directly from the center of the cone for an enhanced soundstage. This guarantees every movie is heard the way the sound producers intended. 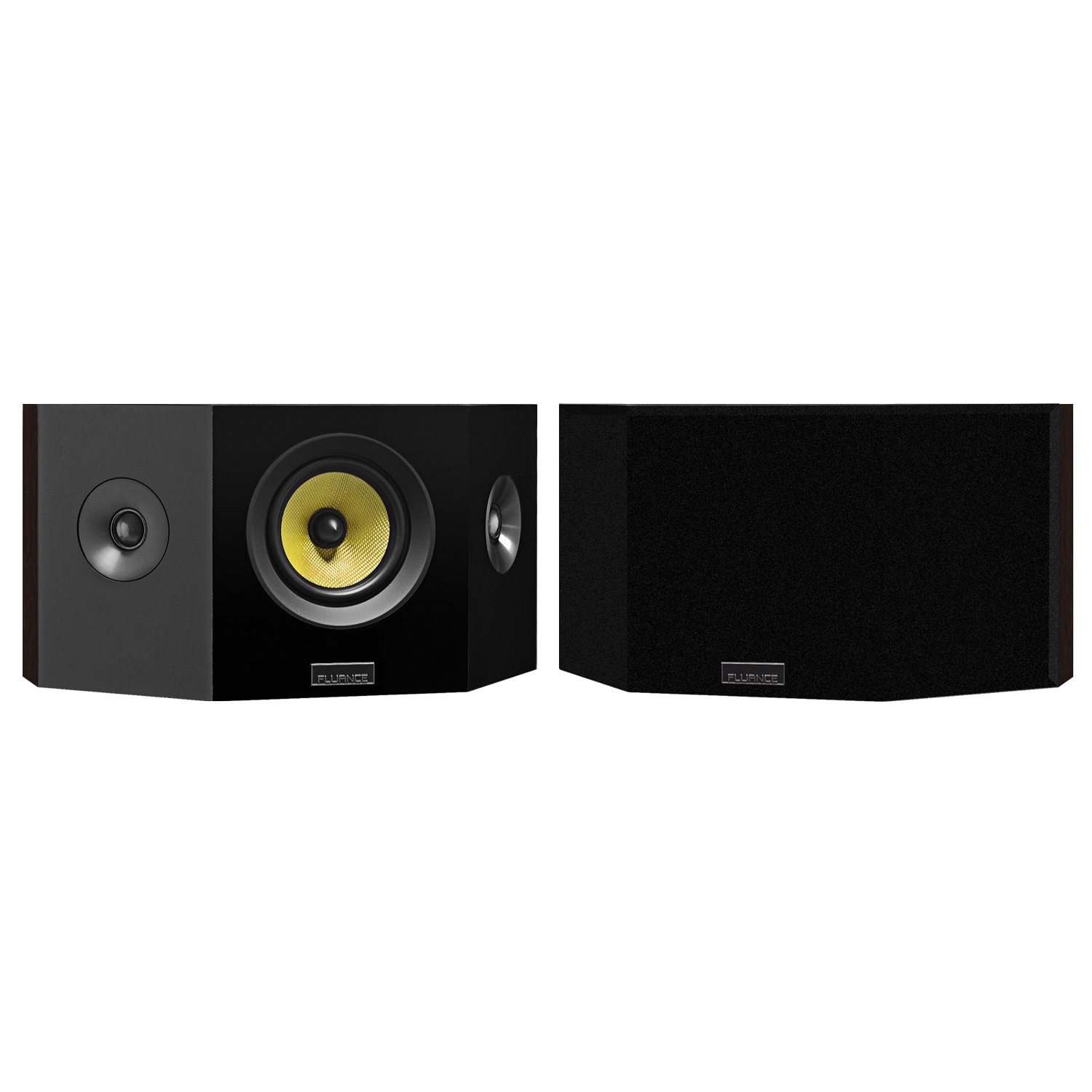 I bought a Fluance Signature center speaker, which was great. Now I needed something to go on my back wall that would fill the room better.These work perfectly.Great sound.

After I received these speakers and as the heading states, TWO things have emerged which really surprised me. Firstly, especially for the money, the build quality is exemplary and the second, which sold me initially, was the low frequency extension in a surround speaker, which unless I am going to spend considerably more, I couldn't find anything else of this type that came close to this performance. In these early stages and within an 11.2 surround system that I run, it is hard to pick out the specifics, however, so far, compared to what I previously had, it is more than holding its own. Now, if only Fluance would add to their product line a larger centre channel and a bigger more powerful subwoofer that goes deeper, than we would really be in business.

Placed these as Front Heights. Speakers sound and look great - as others have mentioned, the mount is frustrating. I worked around it by mounting a 1"x12" piece of wood to the wall and then drilling holes into that to mount the speakers. Even then, getting the holes to line up as desired with the mounts and getting the screws into the mounts was a lot more trouble than it could have been had they simply included a template.

Received these speakers to use as sides in my surround system. Moving back to a 5.1 from a 7.1 system. The bipoles did exactly what I hoped they would do and filled the room with sound. They haven’t been through their break in period yet, but I was impressed just the same. Have them mounted on stands at ear height. Even my wife, who doesn’t usually notice these things, commented on both how nice they looked and sounded. Definitely a great addition to my home theater system.

The speakers are beautifully clear with impressive mids.

Great speakers at a great price. Received in 4 days, ordered through Amazon. Tricky install, because of other reviews didn’t even try banana plugs so had to hold speaker in the air while hooking up wires and the hook 2 keyholes to perfectly measured screws. A template would sure help. Once installed, hold your breath, look great. Just started using so haven’t evaluated sound.

I am a mobile electronics certified professional. I design and build custom sound systems/theaters my whole life. These blow even major high -end manufactures out the water. My B&W bipolars can't compete. And I am not running them as surround speakers. I am using them to accommodate the front and left channels. With the perfect sound adjustments you WILL be blown away!I recommend this product.

I use banana plugs (particularly for speakers requiring use of a ladder) and found the installation rather frustrating as the speaker connects are not sufficiently recessed. However, aside from that initial issue, these get the job done and look good doing it as the main surrounds in my 7.2 dedicated home theatre set-up. They are an excellent value for your dollar but I would not hesitate to recommend them to anyone regardless of budget.

Good speakers but I ultimately chose the Polk Audio FXi A4 as my surrounds. I found the sound to be more natural and flat, response wise. These were a close second and better than all the Klipsch I tested, which were 2x the price!

These are wall-mounted as left and right surround, and the results are fantastic! I've owned at least 5 pairs of quality surround speakers over the years, and these are absolutely the best. I tend to crossover all of my speakers 10Hz above their rated bottom end, and the fact that these speakers dig down to 40Hz produces a large and warm sound. Their bipolar quality is also very evident. If this is the type of sound you're going for in surround speakers, look no further. Fluance support is also superior. I asked many questions before purchasing these and was provided with timely and honest answers. Yes, they're a little on the large size for surround speakers, but the sound benefits they produce is worth the extra wall space.

Picked up a set of these on sale (2019) to replace a set of Elite series (SX-6) I had been using in the kitchen - not only for better looks, but for better sound dispersion.
After installing and doing some playback from a few sources I feel they sound better as well, very happy.

Excellent surround sound speakers that bring surround sound effects in movies to life like I've never heard. These speakers are playing in a custom-built home theater room that was built to one of the “golden ratios” for home theater, the Volkmann ratio of 1.0 : 1.5 : 2.5 (The Home Theater Book). With minimal acoustic panels in place, this architectural feature of the home theater accentuates subtle nuances in digital sound processing effects for music and movies like I've never experienced. So the point is I instantly can hear the difference between DSP effects and the quality of speakers.

I have auditioned these speakers for about three weeks with one of the best scenes for surround sound effects and action sequences I know in the film Act of Valor that features actual Navy Seals in a recreation of a CIA agent hostage rescue. The sound improvement as the Navy Seals drop into the jungle in Central America and move through the operation was so dramatic in comparison to the other Fluance surround speakers, Reference High Performance Two-Way Bipolar Surround Speakers, I had installed previously that it was definitely a “wow” experience even though I'd watched that scene many times before since 2013. The sound is like what you want to hear in a movie theater, but usually don’t because you sit in the “sweet spot” in a home theater unlike in a large movie theater.

For DSP effects that recreate an acoustic environment from two channel stereo I am still working on tweaking them and so I can't give a verdict on whether they are better than the Reference High Performance Two-Way Bipolar Surround Speakers I had in the Left-Right surround channel before I installed these ones. I often listen to classical music with Yamaha's Natural Sound DSP that attempts to recreate the sound of a concert hall in Vienna, more reverb than a dry concert hall, or studio, or other DSP effects, and these add a lot of depth and a much wider sound stage, but I couldn’t say that I actually hear them during classical music listening. Of course, that is the point, you don’t want to hear the surround sound speakers. The improvement in sound quality with DSP on two-channel stereo is less noticeable at this time after listening to these speakers for about three weeks.

As soon as I have the recordings and technology to listen to classical music recorded for Dolby Atmos I expect to hear an increased sense of the acoustic environment of the concert hall/venue and a far more three-dimensional sound, but I won’t know until I hear it for myself in my home theater.

How to install and position your Fluance bipolar speakers

What does each channel do in a surround sound home theater setup?

What is a Speaker Break-In/Burn In Period?

Do I need a receiver/amplifier for these speakers?

All Fluance passive speakers (unpowered) require a receiver or amplifier to provide them power and a connection to your home theater or media setup.

For more information on how to match your speakers and amplifier, please see our video:

Where should I put Bipolar Speakers?

Bipolar speakers are best used as surround speakers. Sometimes placed at the rear of a 5 speaker setup, they are most at home in a 7 speakers setup placed at the sides of the listening area.

They're designed to output sound is multiple directions so wherever you are in the room, you get the same experience.

For more information, see our video: How to install and position your Fluance bipolar speakers.

What size speaker wire do I need?

At Fluance, we recommend using 12 gauge speaker wire to get the best performance from your speakers.

The Ultimate Guide to Home Theater Setup
Benefits of Wooden Speaker Cabinets
The Differences and Benefits of Floorstanding, Bookshelf, Bipolar Speakers
What Does Each Channel in a Surround Sound System Do?