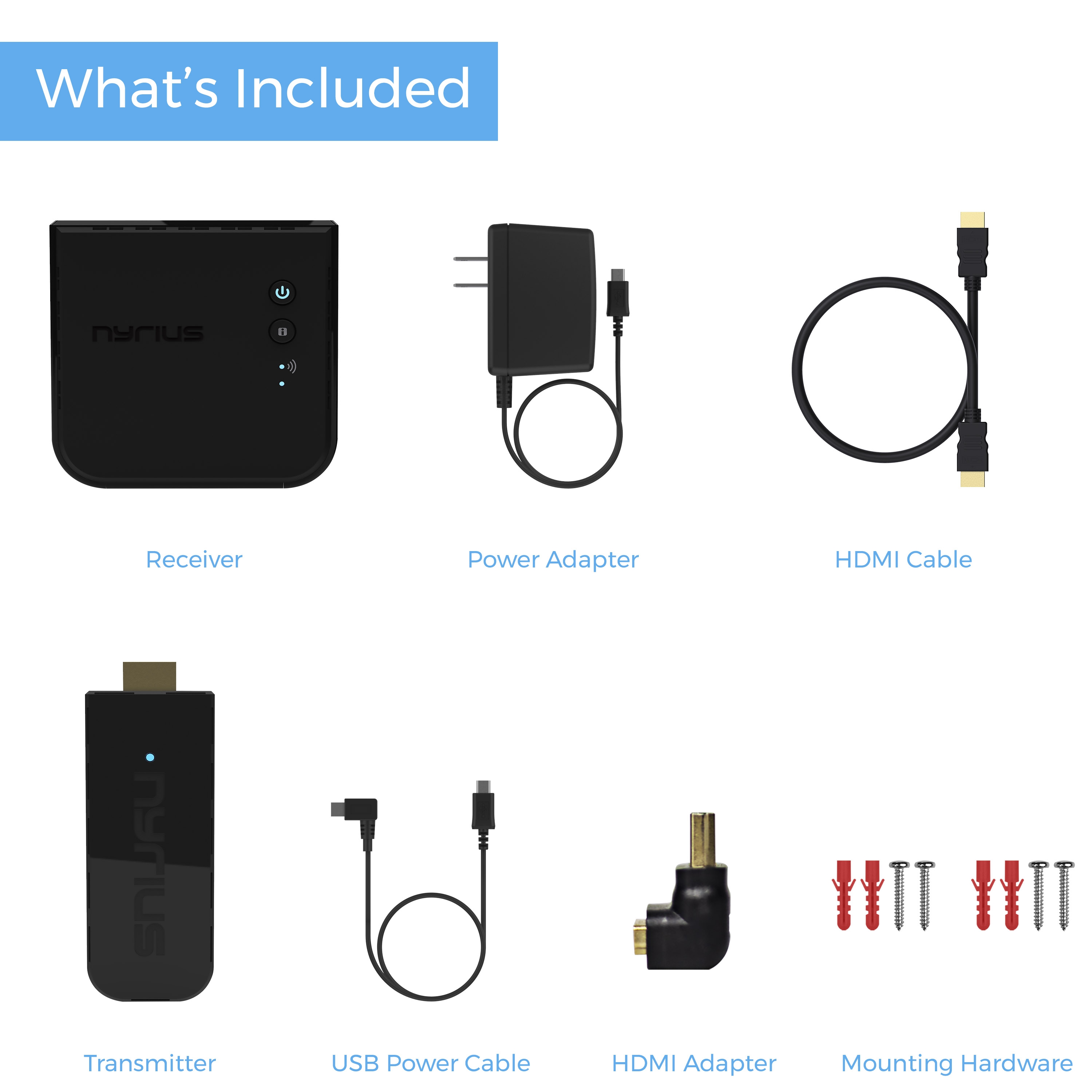 "From my tests, the Aries Prime Wireless HD Transmitter/Receiver works great. I had no issues with streaming full HD content from my laptop to my LG HDTV, an ASUS HDMI monitor, and even my Epson projector through my AV receiver. There was no lag that I noticed while testing out gaming either – including streaming my Xbox One to my Windows 10 laptop and transmitting the signal through the Aries Prime to a TV."

"I find the ARIES Prime to be a very good balance of convenience and performance. For anyone in search of a simple solution to a potential wiring nightmare, I can recommend the Nyrius thanks to its ease of use and reliability."

Open room, less than 15 feet from pc to tv. Got horrible audio with choppy image.

Superb HDMI transmission of audio & video from my FIOS set top box to my kitchen TV. You can download all three available manuals from the WEB. Technically a great product with outstanding performance.

when it works, great product but I am on on my 5th one in 3 years. last 4 not one of them lasted a full year. yeah I'm a glutton for punishment buy one after another but as I said, when it works it great.
Sent and email about my concerns on the last 4. Got a response to get a Fan to kept it cooler oh and not over 50 ft from laptop to TV (mine is 15 ft away. I give them credit though they replied fast just nothing worthwhile in their email.
Should I have taken out the extended warranty? Yep I should have but with each of the other 4 I thought this one will last longer than the other one. I was wrong and now $1000 in spent the extra 22 bucks for the warranty

Did not work. I could see the letters "HDMI CH7" in an intermittent pattern on the screen but I could not see any video - and I tried many various methods to get the video to the screen but to no avail.

It became more difficult than the problem I was trying to solve. I don't like to struggle with technology. It should be seamless and immediate.

I'll return it when I get home today.

Ordered a new unit; last one beginning to cause trouble after 5 years. Connected system (to iPad) and got no signal on screen. Tried several maneuvers to try to get system to work - no success. Was about to return the unit as "DOA" but messed with the connectors. I had ordered and received 3 connectors USB-C to HDMI. Turns out, 2 of the 3 connectors are nonfunctional. Using the one good connector, the Nyrius system works fine. Glad I did not make a fuss and send it back.

Recently relocated my AV equipment into another room and rather than running HDMI through my walls I opted to try this out. It connected immediately and ran perfect, with no noticeable lag. Unfortunately after finalizing my mounting, I started to realize that the receiver runs extremely hot and is significantly affected by temperature, causing artifacts on the screen. Any mounting of the receiver on any hard surface (vertically) doesn't seem to give enough air flow. Back of the TV, wall, etc, all cause issues.I'll have to figure out some other method to mount it, but be warned.

I'm going to give them the benefit of the doubt here. Maybe the receiver is too close to my wireless router (10 feet or so). Maybe my wireless VR headset (HTC vive) is interfering. I don't know, but I do know I tried this on several computers and it's extremely unstable. The video feed flashes in and out. My TV stops detecting the HDMI device on and off. My computers stops detecting the device on and off. It's like I'm at the computer plugging and unplugging a new monitor and also at the television plugging and unplugging the HDMI source.For reference both devices are in the same room. I got an close as a few feet between transmitter and receiver; and as far as 30ish feet. Same result at any distance. No change with unobstructed line of sight between the two either.It just doesn't work in my house. Maybe I got a faulty set?

I use this to connect my gaming PC to my 50" TV in the living room about 10 feet away. This dongle does not need line of sight to opperate. Occasionally I will get a slight graphical glitch (once every 2 or 3 sessions) but I think it has to do with overheating, which leads me to the most important point: Unplug the power when not in use! My smart TV automatically turns on the reciever and leaves it on while watching TV, which was overheating it when not in use.

Connected this from my TV that's installed over a fireplace to my A/V receiver which is about 6' away and it works perfectly. Initially I had the receiver (the part that's connected to the TV) connected to USB power on the TV. I had to reset the connection each time I turned on the TV. Now, after trialing for a few days, I connected it to the power outlet and that issue has gone away. The transmitter is also plugged to permanent power using an iphone charger plugged into the wall.I permanently mounted the receiver behind the TV and noticed some interference. After disabling the TV WiFi the interference went away. My Apple TV is connected directly to the network via CAT 5 cable.Hope this helps for anyone looking for a solution that avoids tearing up the drywall to run an HDMI cable.

We had 12 of these and after 2 years they all started to not connect.

Kt 1
Abdulaziz S January 6, 2022
It works like a charm. Haven't had any reason to contact Tech Support

Ordered it because I had installed another in for my Conference Room and it resolved all the issues with being cabled. Picture quality, sound all transmitted seamlessly.

Best wireless HDMI out there. Good range. Good size. Spend the money and do it right

etemp 5
Jason R November 5, 2021 Kansas, United States
I would pass these up

There are better and more reliable options. We own three of these units in a small conference room and just went back to an HDMI cable. These would stop working, become unpaired, flicker or stop transmitting all the time. The pairing process is painful and the documentation online is outdated and does not fully match the product.

I've had the prime for around 7 years now and it still works fine. It is zero latency so that is true as advertised but it's completely false that it can transmit up to 30 feet. Anything over 15 feet it starts to drop out and you get Minecraft or Mario-like boxes all over the screen. Other than the fact the distance is less than advertised it's great.

How to Optimize your Nyrius Wireless HD Signal

Can I use this with more than one TV or Monitor?
Aries Prime is designed primarily for use with a computer. If you have another monitor connected already, this can be used with the extend feature to act as a wireless second monitor. It can also be used to duplicate the display of that display on another monitor or TV or make your main display wireless.

Aries Prime does not offer the option of multiple receivers for sending video to multiple displays.

What can I use Aries Prime with?
Aries Prime makes a great same room wireless HD solution. You can send video from sources such as Laptops, PCs and gaming consoles up to 30 feet away, with zero latency!

What is Latency?
Also known as input lag, Nyrius Aries Wireless HD transmitters and receivers are considered Zero Latency. This means if you’re using a computer and move your mouse, there is no delay. This makes Aries product great for presentations and gaming!

Does the transmitter connect to USB or HDMI?
Nyrius Aries Prime requires both a USB and HDMI connection, USB for power and HDMI for video. This allows the transmitter to act as an invisible HDMI cable with no USB drivers required!