The Fluance SXBP2 Bipolar Surround Sound Speakers offer an energetic and enticing performance with superior components that enhance the cinephile experience. From every high speed locomotive to the ferocious jet plane flight, these bipolar speakers will reinforce the movie theater experience you dream about.

The unique configuration of the bipolar speakers creates a 3D soundstage. This is achieved by having two complete full-range speaker systems on opposing sides of the cabinet. The results are widespread, enveloping surround sound throughout your room. The SXBP2 are designed for placement beside or behind the listeners for an extremely convincing 5.1/6.1/7.1 surround ambiance.

The enveloping sound design of the SXBP2s will have your heart pumping and your head rotating. The neodymium tweeters of the Classic Series bipolar speakers increase the enjoyment from your favorite cinematic blockbusters. You will feel every spine-tingling scream and rapid stampede from the SXBP2 bipolar speakers.

Richness in the Middle

Experience the high definition sound effects Hollywood intended you to hear with the SXBP2 Bipolar Surround Sound Speakers. The dual four-inch midrange drivers enhance cinema quality home theater by replicating the soundstage, tones and notes you crave from your favorite films and concerts.

The SXBP2s are made with a trapezoidal configuration, the perfect shape to increase home theater sound. Made with engineered MDF wood cabinetry for reduced resonance, the SXBP2 bipolar speakers provide superb, rich sound performances at every volume level. The black ash wood finish match perfectly with the Classic Series, and is your ticket to an engaging, thrilling in-house movie theater experience. 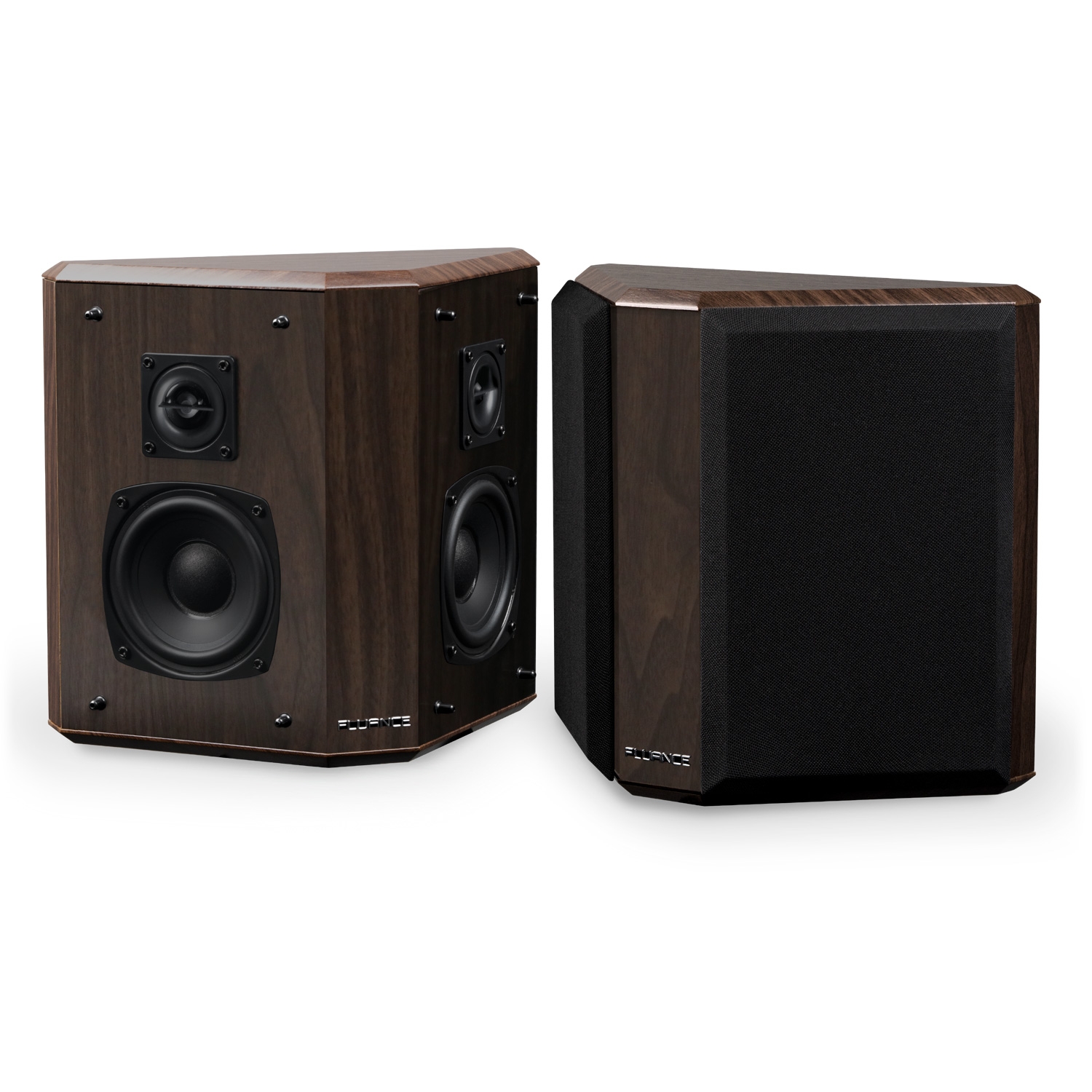 Fluance Bipolar Speakers are beautiful speakers that have greatly enhanced my surround sound capabilities and Dolby Atmos. Sound is very clear and omnidirectional. All of my Fluance speakers have performed flawlessly for several years.

These speakers were a perfect addition to my 7.1 system as the side speakers.

Mark b 5
Vector D March 17, 2021
A bit different than pictured quality not the same as described

My initial drive to buy the speakers was the color it says it's an ash black if you look at the pictures that I have included in this review it is a very shiny black and the cleats that hold the dust covers on or grills are cheap plastic that upon and boxing they came off just to remove the foam shielding.I did test the quality of the sound I would say it's number two out of 10 very disappointed in the sound quality and the construction in the misinterpretation of the products appearance though might not be relevant for a quality review but when you want it to match your other set of surround speakers it is very important to describe or use accurate pictures to describe your product

Envelopes your back speaker soundstage, excellent sound and quality.

I purchased these to replace an old set of speakers I had as rear speakers for the last 20 years. It's amazing how much sound I was missing with the old speakers. I'm happy with my purchase of these and wouldn't have any issues recommending them.

They are great. I need two more.

I am very happy with my new speakers. Great sound.

I'm still warming up these speakers and testing/tweaking fine placements in my Home Theater arrangement, but my impression so far is they do a good job reproducing the sounds that get sent to my rear channels. There's no output below about 120hz, consistent with advertised specs, but they play nicely clear within their range. The mounting brackets are good--better than the prior version's two sets of holes that required combining stud mounting and wall anchors and which are a little more finicky to level--and the binding posts are of good quality (though kind of useless for a wall-mounted speaker to accommodate banana plugs, most of which won't even come close to fitting). The cabinet's are just fine. They could be braced better, but that's an expected trade-off when trying to save money on speakers.Where I'm actually disappointed is in a different quality control issue. The grills are mounted via pegs in the speaker baffle, which nest into plastic sockets/receptacles in the grille. Problem is that they're stuck in there so tight out of the box that removing the grilles takes a lot of force; about half of the pegs yanked the plastic receptacles straight out of the grille frames. Best I can tell, they've got a little bit of contouring but are pretty much just friction-fit. I was able to twist the sockets back off and superglue them into the grille frames, but the amount of force I needed to use to remove the grilles the first time had me worried I was going to break something (which I did, kinda/sorta, but thankfully nothing important that couldn't be corrected.) The grilles come off easier now, and I'm not worried about the problem repeating, but it took some enthusiasm out of playing with my shiny new purchase.Overall, sound is good, mounting and connection is good, cabinet construction is fine, but the grille attachment design is mediocre--functional, but mediocre.

PROS:* Beautiful and unique looking speakers* Solid construction from a mix of hardwood, piano glossy plastic and cloth* Light for their size, weighing in at just 6 pounds a speaker* Use the exact same power draw as a single bookshelf/surround speaker* Can be used as both surround speakers in any setup or as front speakers specifically in a compact surround sound setup even despite what the manufacturer itself says as long as you use a high quality subwoofer* When used as rear speakers in a 5.1 configuration, they mimic both the side surround and back surround speakers of a 7.1 configuration, effectively giving you bothCONS* Bulkier than regular bookshelf surround speakers and need more space* Positioning can be tricky* Relatively high frequency floor of 130 Hz is well above that of most standard bookshelf and surround speakers of equivalent quality and requires some tweaking with the crossover settings in your A/V receiver for your subwoofer and the speakers themselves to match up properlyThese are Canadian speaker maker Fluance's entry level Elite range bipolar surround sound speakers. (SXBP is the range number and SXBP2 is the actual model number). They are absolutely beautiful looking and stunning right out of the box. Solidly constructed from a mix of hardwood, piano glossy plastic and cloth. They're large compared to regular bookshelf surround speakers and double the weight, though that make sense as they are essentially double the speaker.As I live in an apartment, I use a compact Dolby Atmos 5.1.4 setup using bookshelf speakers only. These are replacing an old home theater speaker set from 2006. I use a pair as the front left and front right speakers and another as surround left and surround right speakers. Fluance themselves do not recommend using them as front speakers, likely due to the very high floor of the frequency response which is 130 Hz with a ceiling of 20 kHz. (The lower the frequency floor for a speaker, the more lower level and bass sounds it can pick up and transmit). With this said, they are perfectly fine as fronts in a compact system as long as you set the bass and speaker crossover frequencies correctly which will require a lot of manual tweaking and experimenting in your A/V receiver's settings as I did or for you to run the automatic sound calibration again to get it right.For comparison, a pair of floorstanding speakers can floor as low as 40 Hz and can often be used without a subwoofer because they pick up so much bass while standard bookshelf speakers usually floor at 90 to 120 Hz depending on the quality and brand. With my previous speaker set, I set the subwoofer crossover at 130 Hz and the speakers at 120 Hz (The 10 Hz difference is where the subwoofer and speakers take over from each other.) With the Fluance SXBP2s, I had to set the subwoofer at a relatively high 150 Hz and the speakers at 130 Hz to get decent sound. This is slightly higher than you would expect with a regular bookshelf speaker system and a trained ear will detect that there is some bass being missed with these high settings. On the other hand, the sound is still excellent and you won't be disturbing the neighboring apartments with bass rumble.On the plus side, theses speakers use the exact same power draw as regular direct bookshelf speakers. However, since they shoot sound from two diagonally opposing ends, the sound waves both intersect with each other as they come forward as well as bouncing off the room walls and filling out the gaps regular direct speakers leave. They essentially double your number of speakers and expand your sound bubble. This creates an awesome sound effect where you can't localize the sound the way you can with direct firing speakers. In particular, when used as rear surround speakers, they will effective mimic the presence of both side surround and back surround speakers when placed at the correct angle. This effectively gives you a 7.0 speaker surround system instead of just a 5.0 because of the way the speakers split the sound. I know sound purists argue that modern sound mixing neutralizes both the need and effectiveness of a bipolar speaker. Personally, after experiencing them myself, I call BS on that and could never go back to direct firing speakers. The sound enveloping effect is just awesome, especially with Atmos enabled games, movies and TV shows.These are pretty awesome speakers and I'd highly recommend them as supporting surround sound speakers in a full speaker setup with floorstanding tower speakers for actual home theaters or as main and surround speakers in a compact bookshelf setup for apartments like I have or a smaller room.

Tran B 5
A. P February 18, 2021
Great rear surround speakers! Impressed over the existing bookshelf design I had in place.

The cost/value for this set is fantastic. Taking the place of potentially 4 bookshelf speakers, the surround field is much more believable from this set versus a standard bookshelf set. Not to mention the look of these speakers screams quality home theater versus standard bookshelf. The gloss black center stripe is a nice touch as well. Make sure you break in the speakers as I found the "fuller" sound didnt happen till about the 3rd or 4th movie I watched with the set. But the directions from the manufacturer explain that to be the case.I have owned many types of rear surround speakers, but these are the first that I really felt was worth the extra money for what they are and at that, less than $200 is a steal at this price even. Highly recommend.

The Ultimate Guide to Home Theater Setup
Benefits of Wooden Speaker Cabinets
The Differences and Benefits of Floorstanding, Bookshelf, Bipolar Speakers
What Does Each Channel in a Surround Sound System Do?